Back in 3302 and 3303,after overseeing some drills and having speed- and CRspatched a bit, I created some stuff to make the life of Rat Dispatchers more easy. It comes with a fill-in PDF sheet to keep track of your ongoing rescues, suggestions for IRC commands and such.
+++ UPDATE 3307 +++
The Notepad has been updated to ver. 2.0, including a command reference of the most important #fuelrats mecha commands.

As a digital fill-in PDF or printed and tracing with a pen, including some of the more special command in a little command reference. I hope this notepad will your life as Dispatch make easier.
[Download the PDF] 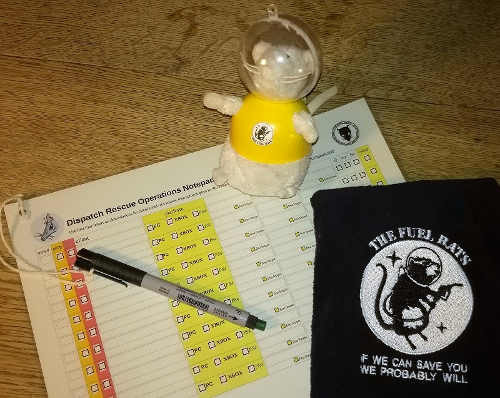 If you are using the free IRC client HexChat, you might find this helpsheet useful.
Two things to note: This was created in 3302, which means that some SAY texts have already been integrated into Mechasqueak and don't need to be prompted separately. Also, longer text macros are not suitable for times with higher client traffic, since they may clog the #fuelrats IRC rescue channel. Use them sparcely.
[Download Text Macro User Commands for Fuel Rat Dispatchers (PDF)]

An archived version from 3302: Here comes a suggestion for a command list that may make life easier (not only) for new RatSpatchs. Including mecha2 beta commands. And HexChat User Command text insertions are also included at the end.